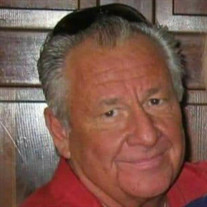 William (Billy) Weinel, 67, passed on September 13 surrounded by loved ones. He is survived by daughter Mandi Martinez, grandsons Christian and Jayden Martinez, father Jack Weinel, siblings Diana, Jackie, Bryan (Dawn) Weinel and Laura (Eddie) Mroczko and former wife Debbie (Chuck) Cameron. He was preceded in death by his mother Phyllis, step mothers Roberta and Helen Weinel, brother Randy Heding, and recently his partner of 25 years Debbie Salem. Billy was born in McKeesport, PA and moved with his family to Tampa at the age of 3. He grew up in the Town & Country area and attended Leto High School. Billy was ambitious and a self-starter. In his early teens he delivered newspapers for the former Tampa Times and managed a lawn service providing yard upkeep to customers in his neighborhood. He joined the Air Force in the 70’s. Billy lived for a short time in Sebring, FL before returning to Tampa. Billy had one daughter, Mandi, who was the love of his life and the sparkle in his eye. He was extremely proud of her sons Christian and Jayden. He would always look forward to their get togethers so he could share all his new stories and laughs with them. Billy spent most of his life working with cars. His love of car repair started at a young age when he received a go-cart. He learned basic repairs from his dad and developed more skills via trial and error. He acquired old cars (“junkers”) which he managed to restore to working order. The tall pine tree in the back yard frequently sported an engine hanging mid-air above an old car. Billy worked as a mechanic at various locations starting with the local Super Test gas station. He later transitioned to selling pre-owned cars. Over the years Billy owned and co-owned several businesses selling cars. He was most recently working for Carrollwood Auto Repair & Sales/AutoMax. Billy could be loud, boisterous, and colorful in conversations. He could weave a story that straddled fact and fiction. Although he readily spoke his mind, Billy had a soft spot in his heart, especially for family and friends. He will be thoroughly missed, but the shared memories of times with Billy will last forever.

The family of William Weinel created this Life Tributes page to make it easy to share your memories.

Send flowers to the Weinel family.