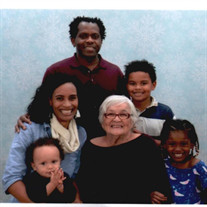 Virginia Lee Stewart was born in Seattle, Washington on October 20, 1929. She was welcomed into heaven’s gates on Wednesday, August 26, 2020. She was a consummate mother and homemaker to Maurice and Maurica Ruth Stewart and an excellent cook who enjoyed preparing meals for her family. Over the years she enjoyed playing the game of solitaire at home, tanning on the backyard patio, crochet, or relaxing to watching mystery programs, basketball or her favorite football games on TV. She is most remembered as a kind soul who always had an encouraging word to a mother or stranger that came across her path with an absolute adoration for babies. “Ginny” as she was affectionately called by her close friends, couldn’t pass a baby without stopping to sweetly talk to a baby or encourage a new mother. Even in the later part of her life she will forever be remembered as an uplifting and complementary person. Her daughter’s friends and Virginia’s church friends and family who remained close could hold onto the memories of her as a sweet and loving person, who always wanted to feed them, and/or wanted them to join her for dinner or dessert. She always asked if those who came to visit or her family if they were hungry. We will forever have loving memories of her, may her soul rest in peace for the loving person she was. She was most importantly baptized in the Church of Christ non denominational church in her early 80's. She was married to the late Maurice Stewart for forty years before he passed in 2012. Shortly after her husband’s passing she learned she had health concerns, but she stayed strong and overcame by the grace of God. She gave her daughter and grandchildren time to enjoy her for another eight blissful years. She had a strong, fighting and compassionate spirit, alongside a compassionate servant’s heart for which she will lovingly be remembered by her daughter and son in law, Maurica Stewart-Udozorh and Emmanuel Udozorh, and grandchildren Ezekiel, Zaylee, and Zephan Udozorh- whom she lived with for fourteen years. She is also survived by her sister’s daughter, Dahlia Ganzon and numerous grandchildren, and her additional children Michael, Thomas, Steve and John Concannon alongside Kathy Concannon-Gimmell, Patricia and Colleen Concannon.

Virginia Lee Stewart was born in Seattle, Washington on October 20, 1929. She was welcomed into heaven&#8217;s gates on Wednesday, August 26, 2020. She was a consummate mother and homemaker to Maurice and Maurica Ruth Stewart and an excellent... View Obituary & Service Information

The family of Virginia Stewart created this Life Tributes page to make it easy to share your memories.

Virginia Lee Stewart was born in Seattle, Washington on October...

Send flowers to the Stewart family.