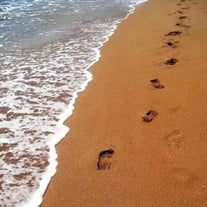 Sigfredo “Freddy” Perez Born March 19, 1960 in Quebradilla, P.R. Born again on 4/1/2018 in Iglesia de Dios Pentecostal MI Church Ave, Tampa, Fl. He boasted about Jesus and being baptized by full submersion on September 2, 2018. Freddy was the Son of the late Hector Perez and Paulina Sanchez. He was also the brother of the late Hector Perez, Jr. Freddy is survived by his beloved Sister, Maria Fortunato, and his Son, Sigfredo “Fredito” Perez, Jr., who despite all the difficulties, Freddy loved with all his heart and eternally treasured his eight grandchildren. Regardless of everything, Freddy would always find a way to send money, toys and clothes to his most cherished family. I am going to take the liberty here to say it like Freddy would. Calmly and quietly, he would say, “My work here is done! God has called me home!” He would claim that old saying “God is good all the time and all the time God is good!” As he boasted in the past, “I am losing my vision, but I can see clearly now.” “Right Blanca! God is good all the time no matter what!” The only time I ever heard him complain was to say, “I never got to preach, but thank God, I learned how to develop and give a Bible Study! I really loved doing that!” If Freddy could, he would say “No me llores! Celebrate my life, as I did. Do not mourn my death because if you accept Jesus Christ as your Savior, then I will be seeing you again!” He would remark and even now I can almost hear him say, “Live the best life you can, and give to all 100%. Don’t hold back what God has generously given to you. Give generously too.” Knowing Freddy, he would remind you, “I had a good life! I had it all,” He was fond of saying, “I’m a businessman, and I think in numbers!” Indeed he did! He owned, opened and operated his first Bravo Supermarket when he was 23 years old, and through the years, he opened two other Bravo supermarkets in Brooklyn, NY. He made millions, and lavished in it with the finest homes and furnishings. He loved dressing in the best suits and ties. If you know him, you know he had this major collection of ties for all occasions including Halloween and Christmas. His thought process was “You can’t take it with you, so let’s go spend it.” He loved to travel, and he visited many places around the world. Sometimes with family and other times he ventured alone. Sometimes he planned his vacations and other times they were just a spur of the moment followed by action. Freddy also loved to eat! The man at his highest weight weighed 450lbs. Then after major stroke, he decided to get the Bypass surgery. He lost over 300lbs! He always said that it was the best decision he had ever made. Altogether Freddy stood about 5 feet tall, but he lived big, and he had a big heart that spanned well beyond 10 feet! How that heart fit in his small size body only God knows. He was generous and gave to those in need. He forgave those who stole from him. And yes, he knew that you were pulling money from the register. But he said “She must have really needed it. I will not take from her children by firing her.” He closed his eyes to the negativity of the world and of his loved ones. He knew you took his watch, but he would say, “It’s only material stuff.” If someone hurt him, he forgave quickly. It is amazing that he did not know the Lord during this time of his life! Imagine the extent of the love after he found Jesus! He loved his parents and made sure they had plenty. Despite separating from his first love, he never failed to make sure she and his son had what they needed. He subsequently married twice. Always the lover…gentle in every way…always a cavalier. Those he loved, he loved big and gave big. His life was his son and his grandchildren. He just couldn’t stop being Freddy. The last couple of years, he had nothing but his social security disability and remnants of painting and sculptures he had collected from his past life. Many pieces he sold to help his son or pay a bill. During his last year, he chose to move in with his sister so they can help each other. He would help her pay the bills, and she would help him by giving him a room and cooking for him. He would laugh, and say, “Shhh…I got the better part of the deal when I got the meal.” I remember when she slipped and fell. He called me nervously and with anxiousness, but goofy Freddy couldn’t keep from saying, “She slipped and broke her hip, but saved the eggs.” When she came home from rehabilitation, he was the one that helped her get around. Then when he got sick, and started losing his vision, she was the one helping him get around. Undeterred by the fact, that she needed help herself. I’d poke fun at them saying, “Here we have the blind leading the blind.” Two siblings who demonstrated the love they had for one another despite physically being unable but having two 10 feet hearts that spurred them on. Maria, Fredito and the extended family will now continue the legacy. God bless them and grant them a long life filled God’s best intentions. While others celebrate the day of dead, and a day that pokes fun at All Saints day, A celebration of Freddy’s life, followed by the burial, will held on Saturday, April 17, 2021 at 11:00 am in Sunset Funeral Home, 11005 N US Highway 301, Thonotosassa, Fl 33592. Visitation will be held one hour proir, from 10:00-11:00 am. We look forward to seeing you there and sharing your memories of his life.

The family of Sigfredo Perez created this Life Tributes page to make it easy to share your memories.

Send flowers to the Perez family.