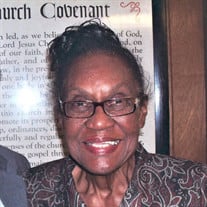 Mrs. Rupertia Falconer Channer was born in Somerton, St. James in Jamaica. She was one of two children of Isobel Green and Ezekiel Falconer. She was married to William Oswald Channer for 57 years. She had one daughter, Joy Elaine Thwaites Lannaman. Rupertia often stated that her career choices during the time that she was growing up were limited to being a housewife, a teacher or a post-mistress, none of which appealed to her. She eventually earned her Registered Licensure in Nursing from Kingston Public Hospital. In Jamaica she worked as a mid-wife, venturing into general nursing and then into Public Health Nursing. As a public health nurse, relocation was a part of the job. Approximately every three years, the Channer family moved to various areas in the parish of St. Andrew, Jamaica, W. I. (Dallas Castle, Gordon Town and Parks Road). In each of these towns, she made her indelible mark. She performed general nursing and mid-wife duties. In 1971 her family of three migrated to the United States to Bronx, New York. During this period, she obtained her Bachelor’s degree in Nursing at St. Francis College and her Master’s Degree in Mental Health Nursing from Long Island University. Her daughter, Joy, ‘joyfully’ typed her many term papers on the Smith Corona Typewriter her mother purchased for her. Throughout her life, Rupertia was an involved and hands-on individual. She was a Christian woman who was firmly rooted in her beliefs. She was always actively involved in her various Church affiliations. She taught Sunday school, presided over the Christian Youth Fellowship programs as well as various program presentations of plays and songs. She firmly believed in affecting lives in a positive, affirmative and supportive way. Over many years she has counseled and helped people in all walks of life to accomplish their goals and expectations (even if they initially did not have a goal). In 1980, the couple relocated to Tampa, Florida where she continued her involvement and industrious nature in new career ventures. Over time, she made several friends and became actively involved in the community. She primarily worked in the Mental Health Field in various capacities. Some of her community involvements included, but was not limited to, membership in the Caribbean Community Association, The Black Nurses Association, assisting in health fairs, in-services, speaking engagements, volunteering, and participating in 5K races. She was also a great entertainer and loved baking and cooking. She also enjoyed gardening both flowers and fruits and vegetables, shopping, and playing games like dominoes and Chinese Checkers. Rupertia was a master in Chinese Checkers, and none of her grandchildren were ever able to beat her at that game. She won Mrs. Jamaican Housewife in 1965 and the grand prize was a trip to the World’s Fair. She also entered several embroidery contests where she won prizes in needlepoint and crocheting in Jamaica. Rupertia is survived by her husband William Oswald, her daughter Joy Elaine, her grandson Andrew William, grand- daughters Vanessa Joy, and Erika Justine as well as her nephews, Steve and Kent. Her mother and her brother are pre-deceased. She will be missed by family, friends and associates. Rupertia was a force to be reckoned with. May the Lord keep you in his tender care. Rest well Rupertia, WE LOVE YOU AND MISS YOU. For God so loved the world that he gave his only begotten son, that whosoever believeth in him should not perish but have everlasting life. John 3:16. She will be greatly missed by family and friends.

Mrs. Rupertia Falconer Channer was born in Somerton, St. James in Jamaica. She was one of two children of Isobel Green and Ezekiel Falconer. She was married to William Oswald Channer for 57 years. She had one daughter, Joy Elaine Thwaites Lannaman. Rupertia... View Obituary & Service Information

The family of Rupertia Channer created this Life Tributes page to make it easy to share your memories.

Send flowers to the Channer family.