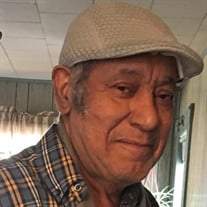 Rosendo Alfredo Castillo-Francisco Sr. passed away on Friday September 17, 2021, due to complications resulting from a stroke in Tampa, FL. He was born on August 30, 1949, in San Francisco De Macoris, Dominican Republic. Strong-willed and passionate, he used these traits to grow and deepen his many loves. He loved cars and took pride in his knowledge of them. He turned his first wrench at the young age of 5 and turned wrenches all the way to fulfilling a lifelong dream of owning his own auto shop. He loved talking cars, religion and politics. He also loved watching baseball, boxing, westerns and also had an affinity for cooking. A true man’s man, there wasn’t a tool he couldn’t use, a car he couldn’t drive or a home repair he couldn’t repair. He also had a deep love of animals. As a child he raised chickens, ducks and pigeons. Raising ducks continued through adulthood. He passed along these loves to each of his children because the love of his family surpassed all his other loves. He is survived by his wife, Lucy Castillo, his five children (Alfred, Eduardo, Victor, Erika (Oleson), and Elliot), two grandchildren (Cy and Annika Oleson), a son-in-law Chad Oleson, daughter-in-law Jami Castillo. His sister Virginia Paula of Lawrence, Mass., his brother Nelson Lopez of Moca, Dominican Republic, his cousin who is like a brother Tony Disla-Franciso of Bronx, NY and several nieces and nephews throughout Florida, Massachusetts and New York as well as other family in the Dominican Republic. Alfredo’s wishes were to be cremated. The family will honor those wishes and have decided to take small amounts of his ashes to the places he lived, loved and held dear to his heart. His ashes will be spread in his beloved country of birth, the Dominican Republic, Massachusetts, New York and Florida. Mostly he will be buried in FL in the spring with his parents who preceded him in death. The Castillo family will hold a memorial service in the spring of 2022 when most of their very large family can be in FL. The celebration of life will also host as a reminder now and in the future of how important it is to take care of our health. With the obituary will be links to donate to the American Heart Association and Dementia Society of America. Dealing with both Alfredo's life reminds us just how far we still have to find a cure. In lieu of flowers, the family requests donations be made to American Heart Association https://www.heart.org/ Or Dementia Society of America https://www.dementiasociety.org/

Rosendo Alfredo Castillo-Francisco Sr. passed away on Friday September 17, 2021, due to complications resulting from a stroke in Tampa, FL. He was born on August 30, 1949, in San Francisco De Macoris, Dominican Republic. Strong-willed and passionate,... View Obituary & Service Information

The family of Rosendo Alfredo Castillo-Francisco Sr created this Life Tributes page to make it easy to share your memories.

Send flowers to the Castillo-Francisco family.