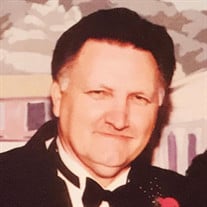 Richard Thomas “Tom” Suits, age 70 passed peacefully on Friday, July 31, 2020 surrounded by his loved ones. He was born on March 31, 1950 in Jacksonville, Florida to Richard (Dick) and Olga Suits. Shortly after his birth, the family moved to Tampa, Florida where he remained a resident until his passing. Tom married Sherry Kight on August 8, 1970 and they were a week away from celebrating their golden anniversary. Tom and Sherry had one daughter, Tina. Tom was a graduate of Chamberlain Senior High School and enjoyed supporting his local sports teams, even including the Atlanta Braves. Anyone that knew him well though, knew his heart belonged to the Florida Gators; GO GATORS. He had a successful career with General Telephone (GTE) that later became Verizon. He started at entry level and worked his way up to a Local Area Manager, Network Operations supporting the entire Bay Area. After 30 years, he retired from the company in 2001. Tom was not only a career phone man, he was also active in his community and spent many hours volunteering his time with youth bowling programs around the Tampa area, primarily at Florida Lanes. He enjoyed playing golf and bowling, even competing professionally in the Professional Bowlers Association for many years. Tom and Sherry were able to also travel extensively in their retirement years, travelling across the country to the west coast, up the western coast into Canada and into Alaska. Together, Tom and Sherry also worked with the Army Corps of Engineers as contractors and volunteers within campgrounds and federal day parks at Lake Lanier near Atlanta, GA for several years. Tom loved his family and all the dear friends he met along the path of his life. He was preceded in death by his brother, Danny Suits. He is survived by his wife of nearly 50 years, Sherry; one daughter, Tina (Michael) Harvey, parents Richard and Olga Suits, and many beloved family members. The family has chosen to celebrate his life in private, but has asked that anyone who wishes to honor his memory, put on that Blue and Orange and post pictures to his memorial page or FaceBook, tagging Tina and Sherry, and show that Gator pride. For our non-Gator friends, just grab some blue and orange, for your love of Tom.

The family of Richard Thomas "Tom" Suits created this Life Tributes page to make it easy to share your memories.

Send flowers to the Suits family.