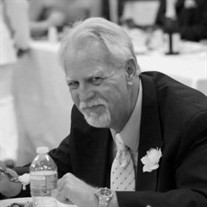 Biographical Sketch of Richard Ray Hudson “Rick” Sunrise: December 11, 1960 Sunset: July 29, 2021 Rick was born in Portsmouth, Ohio to Harold and Mary Hudson. During his childhood Rick moved to several locations to include Indiana, parts of Ohio, Florida, and Oklahoma. This was due to his mother (Mary) going where the Lord led her to preach the word as a Pastor for the Church of God of Prophecy. This is the church that Rick became a lifelong member of. After High School Rick furthered his education at Vincennes University where he would meet the love of his life and the woman that would become his wife, Wendy Schimmoller. After graduating with a degree in Horticulture, Rick and Wendy decided to move to a warmer climate to sunny Tampa, Florida. To complete their commitment to one another, Rick and Wendy was united in Holy Matrimony on September 25, 1982. From this union two children were born affectionately known as Ryan and Liz. Having a family to take care for and yearning to utilize his love of outdoors and landscape, Rick opened up his own lawn care business “Bushmaster Landscape Maintenance”. Through the love of his work, it brought him much success and afforded him the opportunity to do what he loved which was camping and fishing with his family. Rick was preceded in death by his parents Harold and Mary Hudson and Father in Law Glenn Schimmoller. Rick leaves to cherish his memories a loving and dedicated wife Wendy Hudson, two children Richard “Ryan” (Rebekkah) of Land O’ Lakes and Elizabeth Nicole (Roderick) of Orlando, Fla. Two grandchildren Olivia Rose Hudson and Levi Michael Hudson. One sister Sonya Hudson of Connersville, Indiana, a Mother in Law Evelyn Schimmoller, four brothers in laws, four sisters in laws and a host of sorrowing nieces, nephews, cousins, and friends.

The family of Richard Hudson created this Life Tributes page to make it easy to share your memories.

Send flowers to the Hudson family.