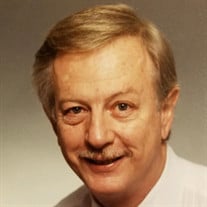 Raymond Carl Schmidt, Jr., age 82, a 40-year resident of Lake Forest in Lutz, FL, passed away on February 22, 2021, of COVID-related complications. He was born in Washington, D.C., on March 30, 1938, to Raymond Carl Schmidt, Sr., and Marie Louise Hopping Schmidt. He is survived by his long-time wife Franceen King and two sons, Raymond Carl Schmidt, III, of Jacksonville, FL, and Robert Woodrow Schmidt of Richmond, VA. His oldest son, Ray, and his wife Sharon have four children: Christopher, Michael, Rebecca, and Jeffrey. Among them they have seven of Raymond’s great-grand children. His son Robert and his wife Meghan have three sons: Woodrow, Griffin, and Malachi. Raymond is also survived by his sister Mary Louise Schmidt of Bethesda, MD, his brother James Halstead Schmidt, and his wife Leigh Ann, of Kensington, MD, and numerous cousins in the Washington, D.C. area. Following cremation, Raymond’s ashes will be buried in the family cemetery plot at St. John’s cemetery in Kensington, MD. Raymond’s career in FL included ownership of a hair salon in Temple Terrace, a pressure-washing business, and numerous sales positions, retiring in 2006. He was very sociable, a “hail-fellow-well-met” personality, with friends from all walks of life. He will be greatly missed here as he steps into his new life of Spirit where many old friends are already greeting him.

The family of Raymond C. Schmidt Jr created this Life Tributes page to make it easy to share your memories.

Send flowers to the Schmidt family.