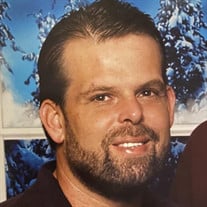 On October 11th 2021 Michael “Mike” Edward Godfrey, at the age of 52, after a courageous battle with Colon Cancer, went into Jesus’s loving arms and now is in Heaven at Eternal Peace. Mike was surrounded by his family and their abiding love in his final hours. He is survived by his wife of 25 years, Amy Godfrey, his son’s, Jeffrey and Jake Godfrey. He is also survived by his mother Darlene LLerena, his brother Kevin Godfrey, his sister Christine Curby, and her husband Terry Curby, his nephews Dallas and Anthony Curby, his niece Ashley Patterson, he is also survived by his mother in law Jean Coleman and his brother in law Tim Coleman and Tim’s wife Dawn Coleman and his niece Emily Coleman. Mike is also survived by many loving family and friends. Mike is preceded in passing by his father Edward Ray Godfrey, his Stepfather Reinaldo “Ray” LLerena, and his dear Grandmother Ernestine Oliver. He is also Preceded in passing by his father in law Joseph “Reace” Coleman. Mike was born on June 18th 1969 in Clarksburg, West Virginia. He spent his young life in Clarksburg and the nearby town of Salem and the areas of Bristol and Big Isaac. Mike attended Big Isaac Elementary School and Summit Park Elementary near Clarksburg. Mike also lived in Montana and South Carolina when he was young. Eventually his family moved to Tampa Florida where he spent his adult life. For around 30 years Mike worked in the Commercial Truck industry. As a tire tech and paint and body tech for Ryder Truck and as a Co Owner of B&M body shop, Foreman and Body shop manager with Freightliner, a service foreman for Tampa Truck Center and an aftermarket parts salesperson for Rush Truck enterprises. Mike was well liked and respected by customers and coworkers and made people laugh with his quick wit on a daily basis. Hunting and the outdoors and going to the shooting range on occasion were some of Mike’s favorite things to do. These things brought him great joy and lasting memories. Mike enjoyed watching movies with John Wayne. His favorite John Wayne movie was McLintock. There were many times you could find Mike watching his favorite tv show Gunsmoke. He loved the character of Matt Dillon. Mike liked to cook and could be found on many Sunday mornings cooking a breakfast for his family that was fit for a king. Mike was a family man and enjoyed times he spent with his son’s Jeffrey and Jake. Mike and Jeffrey went on trips riding the family 4 wheeler and going to the Hunting camp and hanging out together. Mike also loved to watch his son Jake play football and could be found on many Saturday afternoons cheering Jake and his team on. He was very proud of his son’s. Mike was a strong person who believed in working hard. Mike was someone you could always depend on and was very loyal. Mike was the kind of person you would be proud to have in your corner or by your side. We love you Mike and you will forever be in our hearts. Family and Friends are invited to honor and Celebrate Mike on November 4th at Sunset Funeral Home from 12-2 with a service at 2. A graveside service will follow.

On October 11th 2021 Michael &#8220;Mike&#8221; Edward Godfrey, at the age of 52, after a courageous battle with Colon Cancer, went into Jesus&#8217;s loving arms and now is in Heaven at Eternal Peace. Mike was surrounded by his family and their... View Obituary & Service Information

The family of Michael Edward Godfrey created this Life Tributes page to make it easy to share your memories.

Send flowers to the Godfrey family.