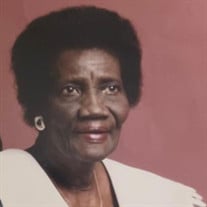 Marion Vera Brown affectionately known as “mother, grandma, and sister Marie” was born in Victoria Town, Manchester, Jamaica on June 4th, 1919. She was the second child of Phillip and Rosella Wright. After the passing of her father she resided in Spanish Town, Jamaica with her aunt who nurtured and cared for her like her own child. She attended the Spanish Town pre-school, elementary and high school. After graduation she taught at the Spanish Town Union Pre-school. On August 19th, 1945 she married Clifford George Brown J.P. the love of her life. The union produced three children Shelia, Delrose, and Florette. Marion gave her heart to the lord at an early age, serving the lord was her life until death. She served in many Christian groups, including the Hampton Green Missionary church Women’s Guild as founder and president. In 2018, her church celebrated their 80th anniversary where she was honored for being the oldest member. Marion left a legacy, throughout her life she was an inspiration to everyone one who knew her, she was articulate, a great story teller, calm, jovial, sophisticated, loving and most of all a strong woman of God. She loved to just praise the Lord and read the bible. Always helpful, giving good council to the young and old. On August 19th 2021 she went home to be with the Lord on the same date of her 76th wedding Anniversary. She has fought a good fight, kept the faith, she had a wonderful blessed life, a comedian in her own way, great batsman with a track record of 102 years. Rest in peace Marie, your memories are indelible written in our hearts. She is preceded in death by parents Phillip and Rosella Wright, husband Clifford George Brown J.P. and siblings Joseph, Jeremiah, Linford and Theresa. Her memories are cherished by children Sheila Brown-Watts (Keith), Delrose Monica Brown, Florette Brown, adopted daughter Lavern Turner and step-son Fredrick Turner Brown. Grandchildren: Michael Brown, Ian Brown, Shelly Ann Clarke, Andrene Cole (Norman), Denie Watts (Aaron), and Lanie Turner (adopted) Great Granddaughter: Mariah Tillman Nieces: Rosetta Wright-Cowan, Theresa Raymond (Lansey), Hyacinth Johnson (Headley) And a host of grandnieces, grand nephews, church family and friends Rest in peace Marion. We all love and miss you.

Marion Vera Brown affectionately known as &#8220;mother, grandma, and sister Marie&#8221; was born in Victoria Town, Manchester, Jamaica on June 4th, 1919. She was the second child of Phillip and Rosella Wright. After the passing of her father... View Obituary & Service Information

The family of Marion Brown created this Life Tributes page to make it easy to share your memories.

Send flowers to the Brown family.