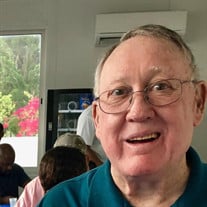 Jerry Wayne Wattles was born in Chicago Illinois on March 4th, 1940, son of Clifford (Bill) Willard Wattles and Juanita Cokley Wattles. He had 3 siblings, sister Carole Salley, brother Bill Wattles, and baby brother Roger Wattles. He grew up very athletic and had a lifelong love of baseball, basketball, golf, football, bowling, and any sports he could play or watch. He married his wife Nikki L Wattles on July 25th, 1959 when they were both teenagers, he was 19 and she was 17 when they wed. They would have celebrated their 62nd anniversary of marriage this summer. He started his job at United Airlines in September 1959, first working at Chicago O’Hare International Airport, then transferring to Atlanta Hartsfield International Airport, then finishing out his career at Tampa International Airport, where he finally retired in 2000 after 41 years. He worked with baggage claim before being promoted to Ramp Supervisor, and was a respected Chairperson of the Machinist Union where he tirelessly rallied for better working conditions and benefits for his colleagues. He also played Short Stop/2nd Base for the Airline Softball League for about 20 years. He helped raise and selflessly provided for 4 daughters: Janet Zerger married to Steve Zerger, Gayle Staber, Cheryl Cohen, and Samantha Johnson married to Doug Johnson. He is survived by 12 grandchildren: Amy, Aubrey, Cara, Ariel, Samuel, Hannah, Marcus, Shiloh, Ziva, Isaac, Levi and Boaz. He also has 4 great grandchildren: Jasmine, Gianna, Anthony Jr(L.A), and Dominique. He was an old school, blue collar, strong, hardworking family man with a wicked sense of humor and infectious laugh. He loved music, he was known to listen to a wide variety of genres, anything from Motown to Country to Classic Rock (and even Lizzo!) and he always tuned into the TV show The Voice. He may have been a man of few words but he showed his love through his actions. He was always there, always dependable, always supporting his family. He passed peacefully at home surrounded by loving family members on June 10th, 2021. He will be forever missed and never forgotten.

The family of Jerry Wayne Wattles created this Life Tributes page to make it easy to share your memories.

Send flowers to the Wattles family.