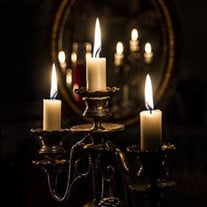 James Monroe Williamson, aged 87, passed away March 2nd, 2020 surrounded by his loving family. James was born on October 8th, 1932 in Atlanta, Georgia preceded in death by his father John Bagwell, and Emma Williamson as well as his brother Neil Williamson, James does have a surviving siblings, Bobby Williamson, and Beverly Williamson. Mr. Williamson joined the United States Air Force in 1950 and later married Sandra Williamson whom he is also survived by. Mr. Williamson has three sons, John, Ryan Williamson, and Jerry Rumph as well as daughters Judy Menchillo, and Jamie Williamson. He also has twelve grandchildren; Nathan, Sean, Quinn, Abigail, Ethan, Nolan, Corabeth, Cameran, Warrick, Delaney, Maddox, and Alora. In Lieu of flowers please donate to LifePath Hospice- Melech Hospice House 11125 N. 52nd Street Temple Terrace, FL 33617 (813)984-2200 One night I dreamed a dream. As I was walking along the beach with my Lord. Across the dark sky flashed scenes from my life. For each scene, I noticed two sets of footprints in the sand, One belonging to me and one to my Lord. After the last scene of my life flashed before me, I looked back at the footprints in the sand. I noticed that at many times along the path of my life, especially at the very lowest and saddest times, there was only one set of footprints. This really troubled me, so I asked the Lord about it. "Lord, you said once I decided to follow you, You'd walk with me all the way. But I noticed that during the saddest and most troublesome times of my life, there was only one set of footprints. I don't understand why, when I needed You the most, You would leave me." He whispered, "My precious child, I love you and will never leave you Never, ever, during your trials and testings. When you saw only one set of footprints, It was then that I carried you."

James Monroe Williamson, aged 87, passed away March 2nd, 2020 surrounded by his loving family. James was born on October 8th, 1932 in Atlanta, Georgia preceded in death by his father John Bagwell, and Emma Williamson as well as his brother Neil... View Obituary & Service Information

The family of James Monroe Williamson created this Life Tributes page to make it easy to share your memories.

Send flowers to the Williamson family.