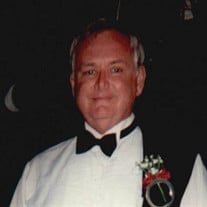 James Guerry Kennedy, 84, passed away on Sunday, November 17, 2019. Jim was born on May 11, 1935 in New Rochelle, New York to James and Margaret (Guerry) Kennedy. He graduated from high school on June 3, 1953 and was accepted at The Citadel in Charleston, South Carolina where he graduated with an engineering degree in June 1957. Upon graduation, he joined the U.S. Army Corp of Engineers. He began his 30-year career at the Florida Department of Transportation (FDOT) in 1959, where he rose to become the first District Secretary of the newly created District 7, headquartered in Tampa, Florida. While working at the Department, he went to school at night and received his Masters from the University of South Florida in 1974. After retiring from the District in 1990, Jim began a successful consulting career at PBS&J (currently Atkins), where he mentored staff and significantly contributed to the overall growth of the company. He launched JGK Consulting, Inc. in 2000 where he continued mentoring, as well as providing professional services to the Department of Transportation and other engineering firms. Though he fully retired in 2012, his name is still recognized amongst engineering professionals across the state of Florida. Jim’s hobbies included golf (which he shared with his children), freshwater and deep-sea fishing, and having an overall good time. He was known for his loyalty to his family, friends and colleagues, his professional pride, along with his fierce competitiveness and strong desire to always win! He was preceded in death by both his parents; the mother of his 3 children, Jeanne Kennedy and son, Scott Kennedy (Kim). He is survived by son, James Kennedy (Sonia) of Tampa, Florida and daughter, Shawn Kennedy (Jennifer Ballard Kyle) of North Fort Myers, Florida; granddaughters, Erika Kenned and Nicole Kennedy and step-grandson, Parker Kyle. He leaves two living sisters, Guerry Heffner and Heather Stephanoff as well as several nieces, nephews and cousin Ann Alderman. Jim had many great memories of good times from his long-term friendship with Lisa Davis, Bryan Williams, Dwayne Kyle and Henry Jean as well as the extended Phillips family. He is also survived by his companion, Sharon Phillips and his caregiver, Genevieve Curry who both watched over him with love and care as he struggled with Alzheimer’s for over 7 years. There will be a private family graveside service at Sunset Funeral Home & Memory Gardens, Thonotosassa, FL. In lieu of flowers, memorial donations can be made in Jim’s memory to the American Alzheimer’s Association, Florida Gulf Coast Chapter, 14010 Roosevelt Blvd., Suite 709, Clearwater FL 33762 or Seasons Hospice Foundation, 8537 Solution Center, Chicago, Il 60677. Condolences can be left on the on-line guestbook at www.sunset-fh.com.

James Guerry Kennedy, 84, passed away on Sunday, November 17, 2019. Jim was born on May 11, 1935 in New Rochelle, New York to James and Margaret (Guerry) Kennedy. He graduated from high school on June 3, 1953 and was accepted at The Citadel... View Obituary & Service Information

The family of James G. Kennedy created this Life Tributes page to make it easy to share your memories.

Send flowers to the Kennedy family.