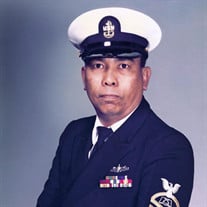 Ilustre Domingo Baytan, 77, of Tampa passed away on August 12, 2020 surrounded by his loving family at home. Ilustre was born on May 17, 1943 to the late Adriana Baytan and Fortunato Baytan. He was born in Cavite City, Philippines. He was a proud retired US Navy Chief who honorably served for 22 years. He was awarded the Navy Achievement Medal, Good Conduct Medal, National Defense Service Medal, Vietnam Campaign Medal with Device, Vietnam Service Medal with one Bronze Star, Sea Service Deployment Ribbon, Navy Expeditionary Medal, Enlisted Surface Warfare Specialist Breast Insignia and Navy “E” Ribbon. After his US Navy retirement, he worked as a garde manger and ice carver at Universal Studios Orlando for nearly 10 years. Ilustre was a strong, hard working, kind and humble man. A man of faith who fought hard to live and he deeply appreciated the gift of life and lived with hope every day. As an exceptionally proud Filipino American, he possessed the heart of a Filipino and the spirit of an American. Making people happy with his delicious dishes and delicacies was his passion. He not only filled your tummy he filled your heart and soul with his generosity. As a husband he was devoted and loved his wife dearly for 54 years. As a grandfather “Papa” was the proudest and biggest fan imaginable. He would often say that his love for his grandchildren was like no other. As a father “Papa” was always there when you needed him and he would do anything for his children. For all of us, he was our superhero and our buddy forever. He was preceded in death by Fortunato Baytan, father; Adriana Baytan, mother; Renato Baytan, his brother. He is survived by Estrella Baytan, wife; Ronnie Baytan, son; Anna Marie Baytan, daughter; Donna Canlas, daughter; Gabriel Baytan, grandson; Yzabella Baytan, granddaughter; Liza Baytan, daughter-in-law, Mia Vanessa Prom, granddaughter; Peter Prom, ex-son-in-law; Nathaniel Canlas, grandson; Homer Canlas, son-in-law. Cesar Baytan, brother, Edgardo Baytan, brother; Norlito Baytan, brother; Rodrigo Baytan, brother and Emily Hall, sister; Mochi and Max, dogs. Ilustre has many family members and friends who love him and will remember him forever. A visitation will be held from 10 - 11 AM Thursday, August 20, 2020 at Sunset Funeral Home with a Service to follow at 11 AM. Burial will be immediately following the service in the Cemetery.

Ilustre Domingo Baytan, 77, of Tampa passed away on August 12, 2020 surrounded by his loving family at home. Ilustre was born on May 17, 1943 to the late Adriana Baytan and Fortunato Baytan. He was born in Cavite City, Philippines. He was... View Obituary & Service Information

The family of Ilustre Domingo Baytan created this Life Tributes page to make it easy to share your memories.

Send flowers to the Baytan family.