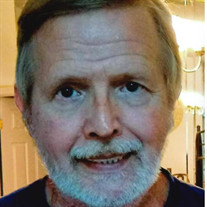 Henry G. Nash, age 67, of Temple Terrace, FL passed away on Saturday, January 23, 2021. He was born on August 16, 1953 in Dothan, Alabama, the son of Dorothy (Hamm) and Henry Nash. Survivors include his wife, Debra (Brown) Nash; daughter, Jacqueline Nash; sisters, Cecilia Ann (Brown) Snowden, Patty (Nash) Cutchens; brothers, Vance Nash, Luther Nash, and Stewart Nash; sister-in-law, Sandra Brown as well as many nieces and nephews. He was preceded in death by both his mother and father, father-in-law, Robert Brown and mother-in-law Marlene (Esper) Brown. A Celebration of Life will be held at 11:00 am, Tuesday, February 2, 2021 at Sunset Funeral Home. Visitation will be held from 6:00-8:00 pm, Monday, February 1 at the funeral home. Burial will be held at 1:30 pm, Tuesday in Sarasota National Cemetery.

The family of Henry G. Nash created this Life Tributes page to make it easy to share your memories.

Send flowers to the Nash family.