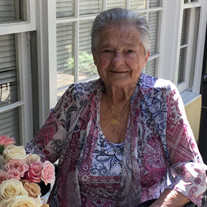 Erika S. Rossmann Ragsdale, 90, passed away Friday evening, October 4, 2019. Her life was marked by rich experience, courage, integrity, and most of all, a deep love for her family and friends. She grew up in Bamberg, Germany, in the aftermath of World War I and the Great Depression, and spent her early youth surrounded by the tumultuous events of World War II. She rarely shared her memories of those times, but the days of her life were shaped by lessons learned in those days. Erika never turned down a challenge. She left Germany as a war bride with a young daughter in tow and made a life for herself and her family in the Tampa Bay area. She traveled the world as a military wife, once even sailing across the Pacific Ocean with three small children to a duty station in China. Later in life she struck out on her own, determined to raise her then five children to the best of her ability, working several jobs and rising through the ranks at Harris Corporation. Erika was best known for her unending love and support of all who were close to her, and for being an independent, feisty, kind, and gentle soul. She always put others first, listened with her heart, and tried her best to her help her children and grandchildren. She shared their joys and sorrows, quietly, in her own way. Erika is survived by her children: Nancy (Allen), Linda, Danja, Jack (Judy) and Melody (Don); grandchildren, Tracie, Tony, Joshua, Karma, Stephanie, Chelsea, and Christopher; six great-grandchildren; a niece and nephew; and many wonderful friends. She is predeceased by her parents, Franz and Maria, her brother, Hans and sister, Theresia. A private service will be held Monday, October 21. In lieu of flowers, donations can be made to the Salvation Army, hospice, or organizations serving children in need. To share a memory of Erika or send a condolence to the family visit www.sunsetmemory.com .

Erika S. Rossmann Ragsdale, 90, passed away Friday evening, October 4, 2019. Her life was marked by rich experience, courage, integrity, and most of all, a deep love for her family and friends. She grew up in Bamberg, Germany, in the aftermath... View Obituary & Service Information

The family of Erika S. Ragsdale created this Life Tributes page to make it easy to share your memories.

Send flowers to the Ragsdale family.