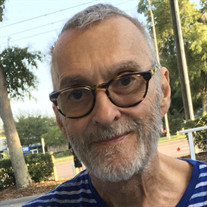 In song it is written, “How do you separate the present from the past? How do you deal with all the things you thought would last, that didn’t last? With bits of memories scattered here and there….” David was the youngest of his sibling group that included an older sister and brother. He was very articulate and talented. His experiences were as varied as the flowers on earth. He graduated from high school in Tampa, Florida in 1973. He earned a BA in Theater Arts and Zoology from the University of South Florida in 1977. A devoted student of theater, he joined a local group of aspiring actors known as The Alice People and would form many of his lifelong friendships. Upon graduation, he moved to New York City. David returned to Florida, studied Theatre Management at Florida State University where he earned a Master’s Degree in Fine Arts in 1982. He then returned to NYC and began working for The Shubert Theater Group. After working for several years in the financial aspects of theater, he broadened his interests and obtained a Masters in Library Science from Pratt Institute in 1992. He worked at the law firm of Willkie, Farr & Gallagher from 1991 until 2017 when he retired as head of reference and electronic services. This job would evolve into many facets where he was highly respected and admired. His boss would describe him later as someone “who could charm the birds from the trees while calming the ire of an ogre”. It was during his tenure there, that David learned of his illness, He would spend the next 20 years battling his disease, often volunteering to participate in experimental treatments. His many friendships would sustain him and although he was often not 100%, he lived life with gusto and adventure. He traveled internationally; entertained visiting family and friends; and always maintained his love of theater. All the while, one never got the sense that David felt defeated in any way. Friendships became family and buoyed by his friends and family, he maintained his sense of humor and stayed close to those he loved. He eventually returned to Tampa in yet another attempt to defeat his illness. He would pass away peacefully knowing that he was dearly loved by so many. David Allan Sellers was, indeed, a “man for all seasons”. His legacy is crystallized in the hearts and minds of all who got to share in his beautiful life.

In song it is written, &#8220;How do you separate the present from the past? How do you deal with all the things you thought would last, that didn&#8217;t last? With bits of memories scattered here and there&#8230;.&#8221; David was the youngest... View Obituary & Service Information

The family of David Allan Sellers created this Life Tributes page to make it easy to share your memories.

In song it is written, “How do you separate the present from...

Send flowers to the Sellers family.