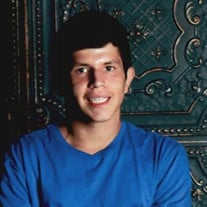 Mustacchio, Camilo, 17, was called home to the Lord on February 22, 2020. Camilo was dearly loved by his family and friends. Camilo was born on July 29, 2002 in San Salvador, El Salvador. He was a student at Strawberry Crest High School.... View Obituary & Service Information

The family of Camilo Mustacchio created this Life Tributes page to make it easy to share your memories.

Mustacchio, Camilo, 17, was called home to the Lord on February...

Send flowers to the Mustacchio family.