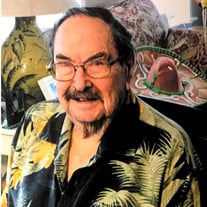 Bruce Edward Williams passed away October 21, 2021 at the age of 91. He is survived by his wife of nearly 52 years, Patricia, as well as his children, grandchildren, and great-grandchildren. Bruce was born in Greeley, Colorado but was a Texan through and through. He was usually found in cowboy boots, Levi’s and a favorite cap. Bruce served in the Army during the Korean War then went to college in Mexico City, Mexico, speaking Spanish with his Texas twang. After college he resumed his life on the road in the Amusement Business. Bruce was a true showman and known to occasionally refer to himself as “Big Hearted Bruce”. He was a self-taught welder and built multiple rides and joints from scratch. The pinnacle of his many creations was his German Funhouse that stretched over three semi-trailers, truly an impressive feat and a testament to his ingenuity. When the Funhouse was set up, polka music would blare over the speakers to add to the ambiance, much to the chagrin of whoever was taking tickets. Bruce enjoyed slightly off color jokes and to share stories of his many adventures on the road or good times had in Mexico or Vegas. He loved to ski and travel. A favorite tradition was their multi-family Thanksgiving ski trips to Colorado. Bruce never met a blue square run he wouldn’t attempt, often returning to the lodge with his mustache encrusted in ice. In later life Bruce fulfilled a long held goal to become a Mason like his father, he was also a proud member of the Showmen's Shrine Club. He was a lifelong reader and enjoyed many hours with his books. He loved playing cards with company and would delight in showing off his card shuffler, “the best gift I ever got” he would exclaim to any who would listen. Bruce was a hard worker and an excellent provider. He loved hearing about his children’s latest projects or travels and took special joy in watching his grandchildren and great-grandchildren grow. He loved his family fiercely but no one was as dear to him as his darling Patricia. He will be deeply missed and remembered with love. The family requests those who wish to express sympathy to consider making a donation to The Cal Farley’s Boys Ranch, a favorite charity that Bruce supported for over sixty years.

Bruce Edward Williams passed away October 21, 2021 at the age of 91. He is survived by his wife of nearly 52 years, Patricia, as well as his children, grandchildren, and great-grandchildren. Bruce was born in Greeley, Colorado but was... View Obituary & Service Information

The family of Bruce Edward Williams created this Life Tributes page to make it easy to share your memories.

Send flowers to the Williams family.