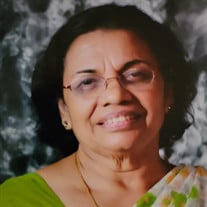 Anney Cherian was born on June 13th, 1939 in Aranmula, Kerala. She was beloved by her parents, RK and Annamma Koshy, and by her four siblings. Growing up, she attended church regularly, and through her faith, discovered her calling to be of service to others at a very young age. She pursued that dream and attended Patna Medical college in Bihar, India where she received her nursing degree in the late 1950s. After completing her education, she moved to New Delhi India and started her career. At a church picnic, she met the love of her life, KC Cherian, and only six months later, they were married. Soon after, Anney and KC started a family and had three children, Babalou, Kavietha and Koshy. She never dreamt that she would leave India, let alone raise her family in a foreign country. Yet, with great courage, fortitude and faith, Anney left her young family behind to pursue a nursing career in the Queens, New York in 1972. By taking on night shifts and working hard at Long Island Jewish Parker Institute for 22 years, she built a successful career and ensured a good life for her family. Her drive and sacrifice ensured that her children received a college education and attained successful careers. Anney was a vibrant and devoted member of the Marthoma Church and an active member of the Sevika Sangam. She was always eager to find ways to help those in need, uplifting other in any way she can. Anney showed her love for her community and church by hosting prayer meetings and preparing delicious food to support the many church ministries. After supporting her church and working as a nurse, Anney retired at 56 years old when she became a grandmother in 1995. Despite living far away at times, Anney was committed to helping raise her grandchildren and found so much joy being a part of their lives. To spend more time with her family, Anney and her husband moved to Tampa, Florida in 2005. The following years were a period of endurance due to illness. Despite being health conscientious and disciplined, the turning point in her physical health was when she had a major stroke in 2019. Anney had to adjust to a new lifestyle, but regardless of her circumstances, she continued to bring love and joy to her family and her friends. Unfortunately, even with the support of her church, her family and her caretakers, her health continued to worsen. On December 6th, 2021, Anney suffered another major stroke which eventually led to her passing on December 16th, 2021. Anney leaves behind her loving husband, her three children, her three surviving sisters, her daughter and son-in laws, four grandchildren, her nieces and nephews, and numerous friends spread over two countries. Anney will be greatly missed by many, but we find peace knowing that she is in the presence of her lord and savior Jesus Christ.

Anney Cherian was born on June 13th, 1939 in Aranmula, Kerala. She was beloved by her parents, RK and Annamma Koshy, and by her four siblings. Growing up, she attended church regularly, and through her faith, discovered her calling to be of... View Obituary & Service Information

The family of Anney Cherian created this Life Tributes page to make it easy to share your memories.

Send flowers to the Cherian family.