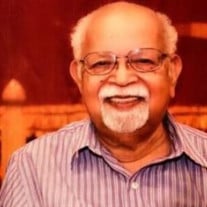 Dr. Abraham C. Thomas, 92, was called home to be with his wife and the Lord on Wednesday, September 23rd, 2020 at his residence in Valrico, Florida. He was born on Wednesday, February 8th, 1928 to the predeceased C. T. Abraham and Annamma Abraham in Kerala, India. Dr. Abraham Thomas was the oldest of six children, brothers the late Rev. C. A. Kuruvilla, Mr. C. A. Abraham, sister Mrs. Annamma Varughese, and brothers the late C. A. Mathew, and Mr. C. A. Philipose. After graduating high school, he went on to earn his degrees through various universities and colleges including his masters and doctorate degrees in Psychology from a university in Chicago, and his degree in Agriculture and Dairy Training from a university in California. He met and married his wife, the late Grace M. Thomas, daughter of the late M P Thomas and Saramma Itty in Mooledom, Kottayam, Kerala, India on August 20th, 1956. He moved to America with his wife and two sons in 1965 where he worked and lived in Los Angeles, California. Abraham and Grace were active missionaries and were integral cofounders of the mission “Life for India” starting in 1969. Through this mission work, 4,000 people have come to know Christ. In 1976, the family returned to the states and Abraham then worked as a manager for the insurance company, John Hanncock. Dr. Thomas was previously a long-time member of the Mar Thoma Church of Los Angeles, California and more recently was a member of St. Mark’s Mar Thoma Church in Tampa, Florida. Dr. Thomas is lovingly remembered by his two sons Abe (wife Ana) and Tom. He will also be forever remembered as “Appacha” by his four grandchildren, Nathan, Rebecca, Valeska, and Abey Emilio, and their extended family. He was a force for God and loved by all who met him. To know Abraham was to know the true meaning of a calling from God. His unyielding faith in the Lord allowed him to serve the Lord even on his hardest days and would stop at nothing to spread the gospel through the world. He and his wife always saw the best in people and went above and beyond for those in need. Truly one of a kind, a servant of the Lord, and a grandfather to all, Abrahams’s warm nature and lovingness made him a shining light in each life encountered and improved through his mission work. He will be remembered forever and greatly missed by all. The viewing will be Friday, October 2nd, 2020 from 6pm to 8:30pm at St. Marks Mar Thoma Church in Tampa, 11029 Davis Rd. Tampa, Florida 33637. Funeral services will be the following afternoon on Saturday, October 3rd, 2020 at 2pm at St. Marks Mar Thoma Church and burial will follow at Sunset Funeral Home and Memory Gardens on 11005 N US-301, Thonotosassa, Florida 33592 at 4pm. Thank you for all your condolences and prayers through this difficult time.

Dr. Abraham C. Thomas, 92, was called home to be with his wife and the Lord on Wednesday, September 23rd, 2020 at his residence in Valrico, Florida. He was born on Wednesday, February 8th, 1928 to the predeceased C. T. Abraham and Annamma Abraham... View Obituary & Service Information

The family of Dr Abraham C Thomas created this Life Tributes page to make it easy to share your memories.

Send flowers to the Thomas family.